Ely Museum is delighted to provide the rare opportunity for the people of East Cambridgeshire to see fantastic Roman objects, which were found locally, and are now being displayed outside of London for the first time. A temporary exhibition, Margins of Empire: Romans in the Fens, will be running from Saturday January 22nd to Sunday June 26th 2022 and will star two incredible Roman objects kindly loaned by the British Museum.

“The helmet and skillet are fine examples of the rich material culture of Roman Britain – it is really down to the unique burial conditions of the Fenland, more often than not waterlogged, that these objects are in such wonderful condition. The British Museum is very pleased to see them being exhibited so close to where they were discovered”

The Witcham Cavalry helmet is a key example of the helmets that would have been worn by non-citizen soldiers when they served in Britain. This helmet was unearthed by peat cutters in 1870 close to Witcham Gravel and held in private collections before it was purchased by the British Museum in the 19th century. Dating from the 1st century AD, this beautifully decorated helmet would have protected the head of the wearer, though the outer lavish bronze casing that survives serves only a decorative purpose.

The Prickwillow Skillet is an ornate pan, with depictions of cupid, dolphins and mythical sea monsters. Intertwining vine and ivy leaves also evoke the cult of the Roman god Bacchus. This superbly decorated pan would have been used in religious rituals in the second century AD and features the name of the Celtic craftsman, Boduogenus, who made it, providing a personal connection. The skillet demonstrates Roman design and ornament of the highest standard being achieved by a provincial craftsman.

“We are very excited to be able to borrow these items from the British Museum and to display them here, close to where they were found, for local people to see.”

Margins of Empire, which opens on Saturday, explores the often unseen role of people living in the Roman Empire who were not Roman citizens. The temporary exhibition will examine their religious beliefs, craft skills and role in the military.

The permanent galleries at Ely Museum tell the story of the lives of the people of Ely and the surrounding fens from prehistory to the modern day. Hands-on objects, dressing up, activities and trails make Ely Museum a fun visit for the whole family. 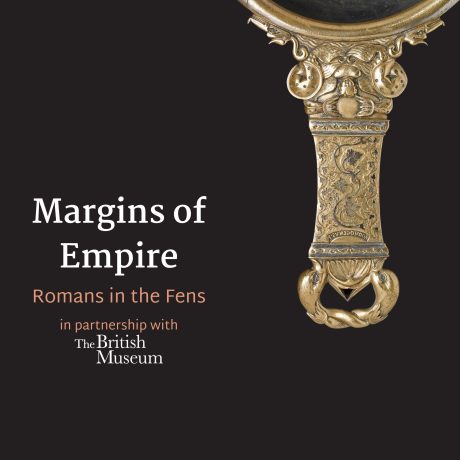